Now that Brexit has become a reality, we’re in a transition period. European regulations will remain in force on the British isles until 31 December 2020. But what happens after? How will Brexit affect cloud and hosting services for European customers who have their website stored on a server in the UK? Arnoud Engelfriet of ICTRecht is a legal expert in the field of ICT law. In this interview he will explain what to expect.

What deal will be made after the transition period?

‘Whatever deal will be made is still very unclear’, says Arnoud. ‘A new deal requires the UK to adopt its own GDPR equivalent. If and when they will do this is still unknown’. According to the British ICO (independent body for data law), there is a plan to adopt the current European GDPR regulations into their own regulations. You would think that data protection of European customers is sufficiently regulated with that. However, the European Commission will first have to decide whether they consider the UK to be an adequate country. And on this point, according to Arnoud, some problems might arise.

What if it takes a long time before the EU gives the green light?

‘The question is how willing the EU is to immediately designate the UK as an adequate country’, says Arnoud. After the transitional phase, the UK will probably no longer accept the European Court of Justice. The GDPR states that a country outside the EU will then be regarded as a ‘third country’. The European Commission then has to assess whether a country is sufficiently competent to process personal data of European citizens.  If the European Commission does not do so, or if it takes a very long time, companies must make agreements among themselves, according to Arnoud. 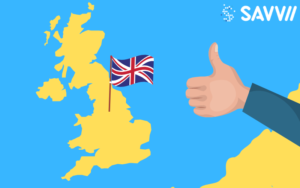 What does this mean for our clients who have their website located in London?

‘The most logical thing is to include extra contract terms in existing contracts. In these, a supplier declares to comply with GDPR regulations. A hosting provider like Savvii is able to ask Linode for this contract change. It’s a bit of an administrative hassle, but after a European company or person is allowed to have their website stored on a server located in the United Kingdom’.

We therefore don’t see any need to move websites to a location on the European mainland. This does not mean that you are not allowed to move your website. If you feel more comfortable moving your website to another server location, we will be happy to help you. Please contact us and we’ll help you further.

Timo - former journalist who hasn't forgotten how to write. Nowadays he prefers to get involved in marketing and WordPress. During the week he drinks protein shakes. In the weekend he drinks beer. Doesn't have a beer belly or a six-pack - maybe both brews are opposing each other.