Hijackers in sight! Protect your content with the blockchain timestamp

Whether it’s photos, text or reviews – you want to protect the content you own. To combat counterfeiting and piracy, or to validate authenticity, it’s wise to blockchain timestamp content. But what exactly does this mean? In this blog post we’ll explain what a blockchain timestamp is and how it keeps your content protected and transparent.

The word “blockchain” will probably remind you of Bitcoin in the first place. This cryptocurrency and its exchange are recorded in a public general ledger. This makes it transparent how many bitcoins a person has and what transactions are made with them. Because everyone has access to this register and because transactions have to be approved by all parties, no fraud can be committed. Instead of institutions such as the banking sector, it is the community that controls each other. However, the blockchain system is more than just a log for cryptocurrency – it can also protect your content!

First, let’s explain what the blockchain system is and how it works. The blockchain is a digital general ledger/register that is managed by all interested parties and does not fall under the management of certain authorities. Per agreed unit of time, a new register (block) is released that everyone receives. This new register, where all data changes are processed, must be approved by everyone. Data is recorded in the blocks and a unique code (hash) is added. This code can be seen as a kind of fingerprint that is unique for each block. 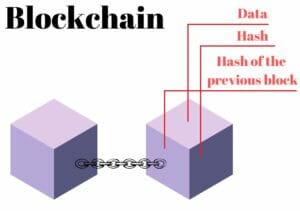 The next block contains a unique code as well together with the hash of the previous block. In this way it’s clear which two blocks follow each other up. A hash is created by a calculation formula that processes all the data in a block into a unique code. As soon as data in a block is changed, the hash will also change. When the hash of a block no longer corresponds to the identical hash in a subsequent block, you can see that data has been tinkered with. The ‘chain’ in a blockchain is then interrupted and ‘breaks’ between the two blocks.

What can the blockchain timestamp do for my content?

Now we come to core of this blog post. What can the blockchain timestamp do for your content? You can turn your content, such as a blog, photo, SEO text, review and more, into a unique fingerprint (hash). If you change one character of the input, like replacing a dot with a comma in a book of a million pages long, then the hash changes. By capturing this hash in the blockchain (a list that can’t be modified by anyone) you’re actually saying: at this point in time on this date, I had the input that this particular hash provided. You have proof that you had that content at that time and therefore own that piece of content. This way you can object to a copyright infringement and/or prove that your material was subsequently used by someone else.

In order to become the legal owner of a piece of content, it is important to create a blockchain timestamp before putting it online. This way, no one can steal your material and then claim ownership of it. A handy plugin to protect your material is the WordProof timestamp tool. From your WordPress dashboard you can easily add a timestamp within five minutes. After each timestamp, a blockchain certificate is rolled out. From media companies to product designers, WordProof’s tool has proven itself in the past. So protect your content and don’t let anyone run off with it without permission. Don’t let the content pirates win!

This blog post is part of a trilogy that we’re writing about the WordProof timestamp tool. So we owe you even more! Two articles follow, in which we quote cases in which the blockchain timestamp has helped to protect content. So stay tuned!

Ready to use the WordProof Timestamp?

Timo - former journalist who hasn't forgotten how to write. Nowadays he prefers to get involved in marketing and WordPress. During the week he drinks protein shakes. In the weekend he drinks beer. Doesn't have a beer belly or a six-pack - maybe both brews are opposing each other.